Photo 1: Construction for the new Hancock Post Office, on Quincy St., began in the fall of 1934. This photo, dated October 1st, 1934, shows the beginning of construction, and is taken looking northwest. Note the old Catholic Church to the left (this site is now the Superior National Bank building). Photo 2: Also taken on October 1st, 1934...this photo, looking southeast, shows how the south side of Quincy Street, second block, appeared that year. The building on the right is now occupied by the Kaleva Café. The building on the left is the Northwestern Hotel, later the Finlandia Bldg., demolished in the 1990's. Photo 3: With a light snowfall that winter, 146" spread evenly over 5 months, building continued through the winter months. This photo, taken on December 1st, 1934 shows much progress. Some haziness from coal and wood burning furnaces appears in the photos. Photo 4: Again taken on December 1st, 1934, but looking southeast, show some snow on the ground, but very little. Later photos show only a foot of snow cover at best, and many show just a light covering that year. External building construction was mostly complete by the last set of photos, dated March 26th, with no snow apparent. 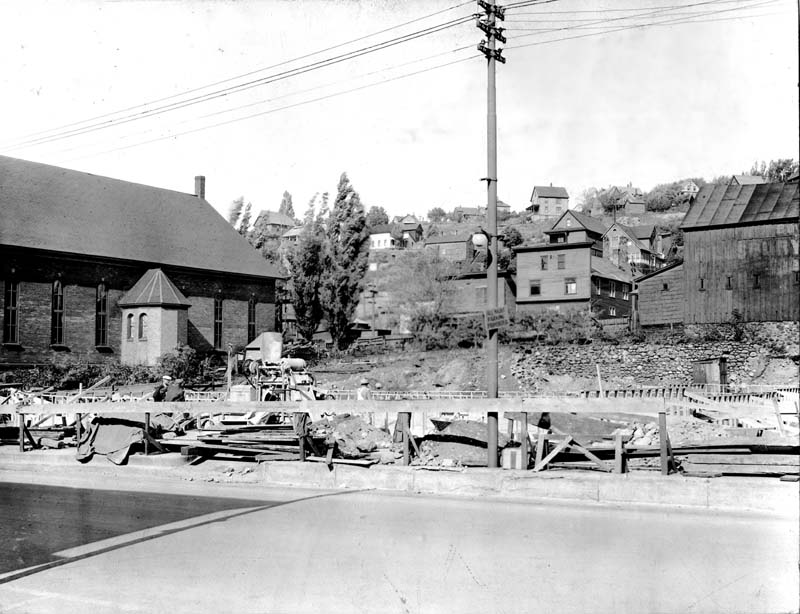