1872 --- Following the Civil War, many states recognized the need for State Militia units, including Michigan. In 1872, the Grand Rapids Guard Company was mustered into the Michigan State Troops, as Company B, 2nd Infantry Regiment. Various companies were added in the next 22 years into two regiments, with Michigan divided into four regional operating areas, of which the U.P. was designated the Superior region. 1883 --- On August 20, 1883, the Superior Post 174, Hancock Light Infantry was officially formed. Shortly after, a Calumet Post also was created. 1888 --- Michigan, with Federal support, authorized a Naval Militia, and in the next few years, a number of naval units were formed across the State. 1893 --- In 1893, the Hancock Naval Unit, designated as 2nd Battalion, First Division, MI State Naval Militia, was formed. At this point, with the creation of the Naval Militia Unit in Hancock, and with two Infantry Posts in the area, Hancock & Calumet, it was decided that Hancock would keep the Naval unit (as it was on the Waterway), and the two Infantry Pots would reorganize into one in Calumet, with Hancock Post 174 disbanding. Things began to happen quickly for the Infantry Units. 1894 ---On 31 December, 1894, the Michigan State Troops were re-designated as the Michigan National Guard, with the Calumet unit designated as Company A, 107th Engineer Battalion. 1898 --- The 2nd. Infantry was mobilized for the War with Spain, and for the duration was designated as the 32nd Infantry Regiment (the MI National Guard could not be accepted into Federal war service, and all members needed to volunteer for War duty, which nearly 100% did). The 32nd was sent to Tampa, FL, but hostilities ended as the Unit was about to embark to Cuba. 1903 --- Under the Militia Act of 1903, passed by Congress and signed into law (also know as the Dick Act), all State National Guard units were federalized into the U.S. National Guard under the Department of the Army. Likewise, the Naval Militia units became Naval Reserve Units under the U.S. Navy. 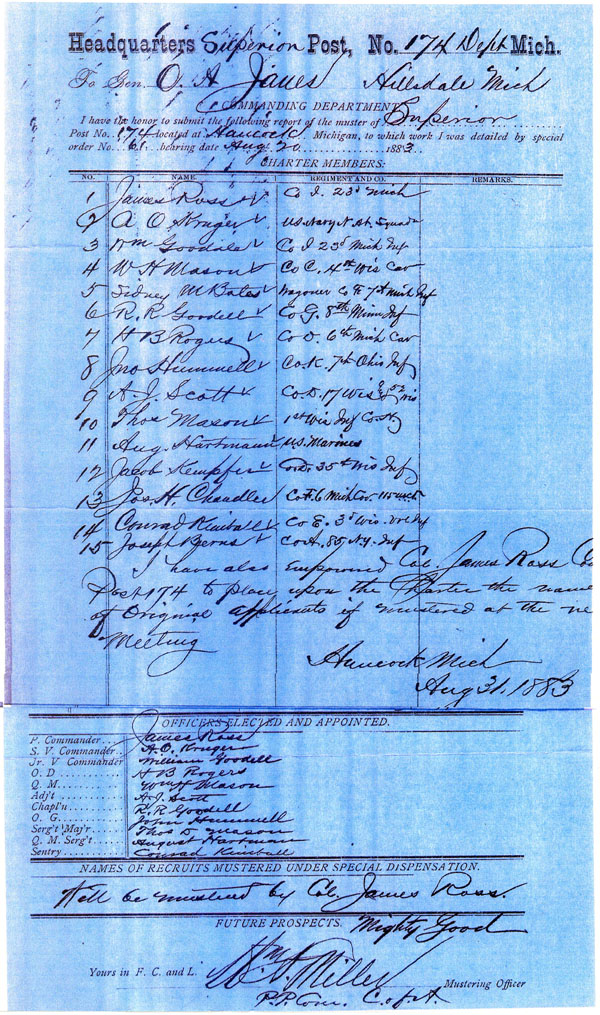